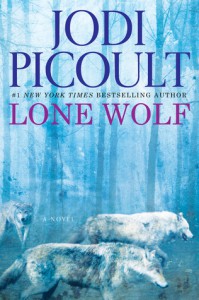 Jodi Picoult is an excellent writer but I always hesitate to pick up her books because her subjects are so weighty yet timely.  Lone Wolf is the same.  It deals with euthanasia.  Not a pretty subject, but one that will touch most people at some point.  I liked the story.  I liked how it was written from each character's point-of-view so you get a well-rounded view of Luke.  I especially liked Luke's sections as he talks about wolves and their packs.  I learned a lot.

The characters were well developed.  I had strong feelings about some of them.  I could understand Luke well.  Cara, I just wanted to turn her over my knee and paddle her.  She was so bratty.  She was my least favorite character.  I liked Edward.  Yes, he had to grow up more but he did manage to create a life for himself and survive.  I liked also the input of some of the peripheral characters.  It was interesting to see what outsiders thought of Cara, Edward, and Luke.

This was a good book.  It flowed well.  It read quickly because I never got bogged down in one character's emotions because of the changing points-of-view.  I read it in one day basically.  I could not put it down.