ALL QUIET ON THE WESTERN FRONT by Erich Maria Remarque 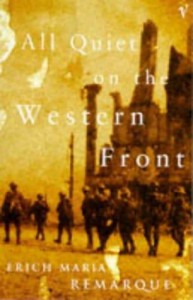 Wow!  When I first read this in my freshman year of high school I hated it.  Now what a story!  The prose is so beautiful and powerful.  I liked the first person point-of-view through Paul's eyes.  I also like the stream of consciousness of Paul's thoughts on the war and war in general.  He was so right about how the soldiers would not fit in after the war.  His sentiments are as true today as they were then.  Paul shows what a soldier goes through and how he can never talk about it to someone who has never fought in a war.  Words cannot describe seeing all your friends die.  Others cannot understand the horribleness of what the soldiers lived unless they have lived through battles, trenches, bombardments, snipers, gas attacks, the dirt and filth.  This book is as timely today as in 1929 when it was published.  We don't seem to have learned much during that time either as wars still continue.  Toward the end of the book, Paul states that the factory owners got wealthier--how little things have changed.