THE BOOKSHOP OF YESTERDAYS by Amy Meyerson 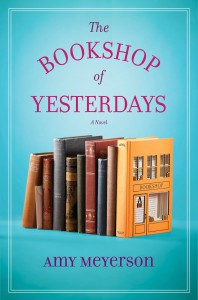 Miranda inherits her late uncle's bookshop in Los Angeles. He leaves her a final scavenger hunt where she needs to find books and people. She goes on the hunt and it is not what she expected. Her life changes in many ways.

This was not what I expected but it was excellent. I could not have followed the clues but she finds people that knew her uncle and slowly she puts his and her stories together. Her parents are not forthcoming until she solves the hunt. I liked Miranda but she was wishy-washy at times and allowed things to happen to her. Once she discovered her backbone and the truth I liked her a lot better. When she started making choices instead going with the flow she became a much better character. I also liked Lee whom she had to find. He was the most honest of all. I will read more of this author.