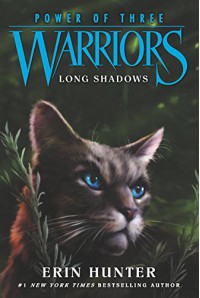 Sol has a grip on ShadowClan and it causes Tawnypelt to leave them and come to ThunderClan where her brother, Brambleclaw, is deputy. Jaypaw, Hollyleaf, and Lionblaze know that something must be done to break Sol's hold on the Clans and keep four Clans. While dealing with this, greencough is going through ThunderClan as well as fire. Then when it looks like ThunderClan will make it through all this, a deeply held secret is revealed. What happens now?

There is a lot going on in this book. Jaypaw, Hollyleaf, and Lionblaze are in the middle of it all. I think I know the secret but I guess I'll have to read the next book to find out if I am right. This is the first book that has that big of a cliffhanger. I found Jaypaw's one dream very interesting. I'd like to see where it will go and will the extent of Jaypaw's powers as well as Lionblaze's seeing the spirit of Tigerstar ever by revealed.

I love this whole series. This one is my favorite.