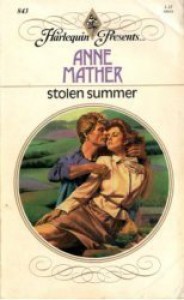 Ben has been in love with Shelly since he was a teenager. Though she is older than him, his feelings have not changed when he meets her as a man. Shelly, not knowing who he is at first, is powerfully attracted to him. When she learns who he is, she feels their relationship is inappropriate and tries to drive a wedge between them. Will it work?

This is very dated. The age gap is only six years and her friendship with his mother has nothing to do with what is between them. His fiancée is a horror and I knew she would not last. Others try to do damage to Shelly but she manages to free herself from all of that. I liked the kindly listening ear of the village doctor who helps her straighten herself out. Ben is aggressive. When he doesn't get his way, look out.

While I have always liked Anne Mather's books, this is not a keeper.