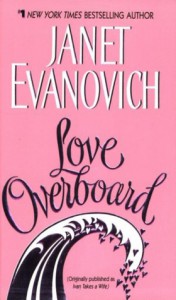 One of Janet Evanovich's early romances, it is as funny as her Stephanie Plum series. Ivan has sold his home to Stephanie Lowe who has had nothing but problems with it. When her cousin Lucy decides to get married she talks Stephanie into filling in as the cook on Ivan's sloop. Stephanie is not much of a cook but she decides to help out her cousin. Ivan wonders what else will happen with Stephanie on the sloop as he met her as she rolled down the hill to the sloop then swore. After they get back on land Ivan requests a room for the winter at his old house which Stephanie wants to turn into a bed and breakfast. Then it gets crazy.

I laughed out loud at the predicaments Stephanie got herself into. I had so much fun reading this story. I liked the characters. I loved the motivation behind many of their actions. There were times when Stephanie and Ivan were serious as they came to know one another. Other times they were mentally face-palming themselves over some of the "action." This is worth the read.