THE MIDNIGHT LIBRARY by Matt Haig 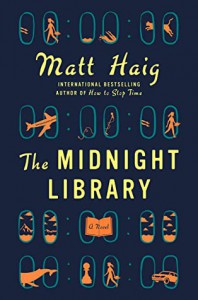 Nora has decided she wants to die so she chooses her time but instead of dying she goes to The Midnight Library which is a place between life and death. There are green books on all the shelves as well as the Book of Regrets which is a book of her regrets. Also there is Mrs. Elm, her library teacher from school who turns out to be her guide to the Midnight Library. Nora is given the chance to live other lives which her choices made impossible to live when she was still on earth. She has many choices but which ones will she want to relive? Which ones will she not relive? Are there more lives than we have been told about? Which life does she choose?

This was not what I expected but I enjoyed it throughly. While I liked Nora, she was a bit of a downer at times. As she is living her different lives I felt for her since she was dropped into the lives with no idea where she would end up and she ends up looking crazy each time. I also liked Mrs. Elm. She stayed with Nora at the Midnight Library helping her to choose and guiding her to a life. The secondary characters can be in more than one life but mostly they are in one of her lives and she tries to figure out how they fit in her life

The story is interesting. It relies solely on Nora's choices. She recites philosophers often though the people in her lives have no idea the "real" Nora was into philosophy and it is the "real" Nora we journey with. I liked that we get larger views of her life and mentions of other journeys she has taken without us being aware of those lives. She needs to pick a life or she will be dead.

I wasn't sure which life I wanted her to choose but as Mrs. Elm said "the only way to learn is to live." I was glad to be on the journey with her.