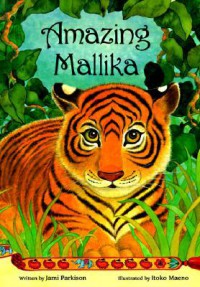 Mallika is a tiger cub who along with her mother and brother have staked out the watering hole waiting for prey to catch to eat. A peacock comes and Mallika pounces on it and her brother tries to steal it. Mallika loses her temper and her mother tries to teach her about losing her temper. When the monkeys start to tease, once again Mallika loses her temper and it has consequences. While Mallika tries to control her temper, she cannot sometimes and she has bad consequences. When she falls into a ancient building she finally learns the value of controlling her temper.

I liked this book. I loved the illustrations. I like that a lesson was taught through example rather than telling Mallika not to lose her temper. I also appreciated how Mallika finally learns the lesson.

I enjoyed the section after the book given to parents and teachers on how to teach about emotions. It felt very spot on. I liked that a list of books in this series and what they taught were given. I loved the last two pages where a short history of India is given as well as an introduction to the animals in the Ranthambhore Park.

An enjoyable story where I also learned a lot of new information.