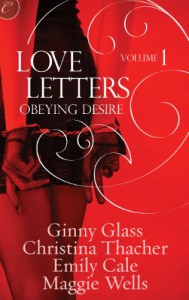 An anthology of four stories with BSDM as the focus.

The first story A IS FOR ASSIGNMENT by Ginny Glass has Lane, a police psychologist, working undercover with Detective Cameron Isley to break a drug ring at the local BDSM club. One night she dominates. The next he does. Things go too far, and they cannot think of the other without remembering the night she dominated him at the club. But will they break the drug ring? I liked this story. I liked Lane and Cameron. He is too used to dominating others that seeing him fall submissive under Lane's hands is good. I liked that both kept thinking of their session. I also liked that both decided to be honest when the time comes to talk.

Second is B IS FOR BONDAGE by Christina Thacher. Rachel goes to Marc to learn how to be a good submissive so she can gift her submissiveness to her boyfriend, Danny. Turns out Rachel and Marc break the rules. Danny is no dominant but an abuser. When Rachel goes to her final lesson, the truth comes out. Will Marc like the truth? I liked Rachel for her shyness. I liked Marc because he tried to follow the rules and not get involved with Rachel. When she comes for her class after Danny finds out, I liked how Marc showed Rachel her bruises did not change his feelings. I also liked that he puts the brakes on but Rachel has a mind of her own.

Last is D IS FOR DETAINED by Maggie Wells. Sherry has to go back to her hometown to clean out her parents' shop. Not having good memories of the town makes it hard for her. While there, Deputy Tyler comes in thinking she is a criminal. He is also the only boy who said no to her during high school. He now makes up for it. Will Sherry forgive him? I liked this story. Sherry finally finds out why Tyler said no. They explore what they could have had and find out they like it. It was fun watching Sherry goading Tyler. I also liked that Tyler has plans for the future which include her.

Each story had its own special hotness. I will have to see if more volumes were written in this series.