JOSEPH, RULER OF EGYPT by Nancy Radke and Alison Miller 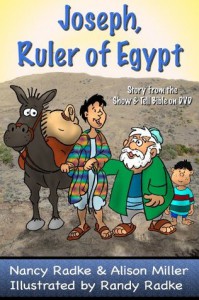 This is the story of Joseph and his brothers. Joseph can interpret dreams. When he interprets dreams about his family, his brothers hate him. They hate him more because he is their father's favorite. When Joseph comes to bring them food, they plot to kill him but decide to sell him to merchants who are traveling past them. Joseph ends up in Egypt, a servant to Potipher. He gets thrown into jail where he interprets dreams for the other prisoners. His ability is brought to the attention of Pharoah who has him removed from jail to interpret his dreams. He becomes a ruler of Egypt.

This is one of my favorite Bible stories but so much was missing from this version. Though it is for children, they can understand the whole story and too much was missing in this book that it felt like I was walking into the middle of the story. I felt that I was missing the story. It also ended abruptly so I got no closure of when Joseph's brothers come to Egypt to buy food during the famine. Children may need a little explanation, but they know when things are left out. I'd like to see the author rewrite this book and put the whole story of Joseph and his coat and his brothers. The illustrations are beautiful, and they deserve the full story also.